The OSURR fast neutron beam facility is able to deliver a reactor-spectrum neutron beam with a diameter of 1.25” (32 mm) and relatively high flux (~ 2E7 nv) that can be used for both thermal and fast neutron radiography and tomography.

The facility is particularly useful for researchers interested in the fields of neutron imaging and its applications such as imaging water flow in fuel cells, mapping hydrogen in metal hydride, lithium distribution in Li-ion batteries, defects in additive manufacturing process, and the general non-destructive testing (NDT) and non-destructive evaluation (NDE). It can also be used to evaluate neutron sensors, rad-hard electronics, and for other neutron sensitive studies.

A moveable backstop for the facility allows for a maximum experiment setup depth of 2 feet from the collimator exit, with approximately 3 feet of working space from side to side.

A rotating neutron chopper is available with a rotation speed up to approximately 1200 rpm that can produce a train of neutron pulses with a minimum duration of approximately 1 ms.

In addition, a fast neutron tomography setup is available. This automated neutron computed tomography (CT) system has a mobile imaging station which provides researchers with flexibility, efficiency, and reduced imaging time, as well as repeatable experimental setups and runs with online focusing. The imaging apparatus is composed of a water-cooled EMCCD camera, a front-surface mirror, and a high energy neutron-sensitive PVT scintillator, with a customized mobile design and a special on-line focusing feature. A total of 5 motion stages are built into the system to give XYZ and rotational freedoms for sample positioning, and there is another linear stage to fine tune the distance between the camera and the mirror. A customized Python code and user-friendly GUI provides a fully automated imaging acquisition not requiring user interaction but that allows tracking of progress. A complete fast neutron tomography dataset with 360° projections can be acquired in less than 2 hours, with 20 seconds per projection. The on-line focusing is accomplished with a dielectrically actuated liquid lens. The focusing algorithm is written into the code to search for the best spatial resolution by adjusting the applied voltage to the lens. While a spatial resolution of ~ 500 mm has been achieved for fast nCT, our thermal nCT has a resolution around 150 mm.

The beam shutter is a cylindrical drum with lead shot to shield against gamma radiation when the beam is not in use. The majority of the neutron radiation is attenuated by the beam-stop shielding external to the shutter.

The longer segment of the collimator, closest to the reactor core is 42" long and contains graphite, borated cement, MetamicTM, and lead apertures along with a 4" thick bismuth plug to reduce gamma radiation in the beam.

A shorter segment of the collimator has a larger diameter (~7” O.D.) and is situated inside the tube shutter box. 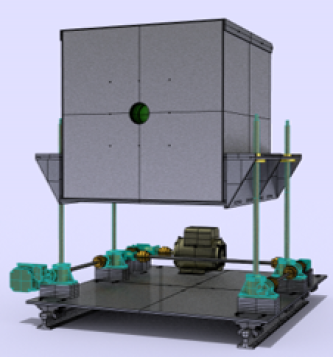 This upgraded beam port infrastructure was funded through a Reactor Upgrade Award from DOE NEUP received by the Ohio State University Research Reactor (OSURR). The automated neutron imaging station was built by Mr. Matt Bisbee who is a DOE NEUP Fellow and was partially supported by Lawrence Livermore National Laboratory.

What is fast neutron radiography?

Fast neutron imaging is a non-destructive evaluation method that provides contrast in the images based on the elastic scattering cross sections differences of the materials. It has a higher penetration and less activation compared to thermal neutron imaging, which has a potential for spent fuel and dry cast storage canister evaluation.